A sermon about the time John the Baptist waded into the Jordan and baptized Jesus even though he didn’t want to. (Matthew 3:1-17)

Last week we heard the story of the Magi who came to see the tiny child that the skies had announced with a shining star and voices of angels and this week we find ourselves peering up at the sky once again, this time, with Jesus. Not baby Jesus, but a grown man who has come with the crowds to be baptized… who has come to this sacred place fraught with history and meaning…

To be clear… John isn’t baptizing folks so they will be saved when they die. He’s marking them and reminding them of their entire salvation history and inviting them to claim it. John has become the prophet he was born to be and his words are powerful! Come and be baptized and live like the claimed, liberated, loved, empowered, powerful people of God you are! Make this day a new day!

Like the prophets that have come before, John chooses to create a movement on the margins and the people come… “the people of Jerusalem and all Judea were going out to him, and all the region along the Jordan” (Matthew 3:5) crowds were streaming to the Jordan for renewal and repentance… not a ritual for rituals sake but as part of a revolution… for the common Jew quashed by the Roman Empire and at the mercy of the Temple Elite repentance meant relinquishing their dependence and their loyalty to the very authorities who controlled their lives.

And according to the Gospel of Matthew, this is where Jesus turns up for the first moments of his public ministry, not the temple or the synagogue, not to confer with the high priests or those in positions of power. Instead he arrives on the river bank – this sacred, contested, political, spiritual and religious space… and asks to be baptized.

This isn’t the first time Jesus and John meet… we know they’ve met before, still in the wombs of their courageous mothers… when Mary sang her own liberation anthem… and I wonder if they hear it’s echo as they greet one another in the flesh on the riverbank.

At first John refuses to baptize Jesus, but Jesus insists… for some Jesus’ insistence is cause for discomfort… why would a sinless man repent, why would God’s own son submit to someone else’s authority, how could this cleansing act have any power over someone already so perfect?

Jesus will defy expectations throughout his life and ministry. He will scandalize the established religious community and disappoint his disciples again and again…. he will refuse the hospitality of rich and sit on the floor of the poor… he will dismiss the wise and encourage children and women and outcast to sit at his feet… he will forgo religious talk for dinner and stories… he won’t claim a throne or pick up a sword – even in the name of righteousness. Even John will one day write him and ask… are you sure you’re the one??

But for now John finally agrees– he plunges the body of Christ… this wholly human wholly divine man under the surface of the Jordan.

I wonder if Jesus’ whole life flashes through his mind’s eye as he sinks beneath the surface. Not just his embodied life, but his life that began at the beginning – when all of creation first burst forth. Beginning with that first infinite breath of God and on and on through his own life, death and resurrection. And then forward through time all the way to ours.

When we baptize today we often say the words, “remember your baptism” – can you remember? Can you tap into this collective memory – can your imagine yourself part of the whole? The ALL of creation? Plunged beneath the waters of God’s making and rising to hear God’s words:

As someone raised up in our Christian tradition and trained up as a Presbyterian Pastor… as someone who loves the communities and ritual we’ve created I worry and I wonder about what we’ve done with this particular sacrament, this baptismal moment… we’ve taken this baptismal moment… a ritual created as an act of protest against the temple authorities, an act meant to symbolize the power of the river, the people, the margins, of God’s ability to turn the world on it’s head and we’ve institutionalized and domesticated it… we’ve written rules about it, who can do it and what they can say and can’t say about it when they do. We’ve treated this moment like a ticket to be redeemed for salvation or a place at the table or to a place in heaven…

But the waters of baptism aren’t meant to save us, they are meant to renew and empower us. They aren’t meant to transport us to safety but to transform us into people who aren’t afraid to live – who aren’t afraid to stand against hate and oppression, who aren’t afraid to love; The waters of our own baptism are meant to stir our communal memory – to connect us to the God story that can hold our story and the next person and the next person’s story… until they are all woven together into one big beautiful, mess of a story and we don’t know who’s is whose and we can’t separate ourselves out or line ourselves up according to who’s the best or smartest or strongest or most deserving and so we all have to accept the fact that when God calls out you are mine, you are beloved, it is with you I am most pleased that God is talking to ALL of us….

When I first encountered this idea, maybe 15 years ago, that in Christ’s baptism, God calls us each beloved – I believe in Henri Nouwen’s book, Life of the Beloved, I was astounded… I wasn’t sure I could believe it about myself – that God would love me like God loved Christ, so I started telling my boys who were tiny at the time, every night at bedtime: “You belong to God, you are beloved, you are mine, you are beloved.” such a simple and yet, such a powerful statement – so easy to say and yet… so hard to believe about ourselves, isn’t it?

I found this simple truth so hard to hold onto over the years – especially in the times of loss or failure that I finally got it tattooed on my arm… yep. Tattooed. On my arm. You are beloved. Where I could see it. Every day.

Nouwen says the biggest obstacle to knowing God’s love is that we can’t seem to hold on to this simple truth when we are hurt, rejected, abandoned or failures… We can’t believe we are beloved in the face of hatred or abuse and so we acquiesce, we reject ourselves… but what if we didn’t? What if Leelah Alcorn the young transgender woman who committed suicide by stepping in front of a truck in the last weeks had known herself as beloved before she heard the names rejection or abandoned? What if we taught small children to look in the mirror and see beloved before they saw strong or weak, big or small, black, brown or white?

Nouwen says when  truly believe this about ourselves – that we are beloved, we can’t help but believe it about others as well… I know, it’s idealistic isn’t it? But isn’t that what Jesus modeled throughout his whole life and ministry?  A ridiculously expansive grace that even his followers wished he would tone down? What if police officers… What if protesters, What if Americans…. What if Christians… What if Muslims and Jews… What if we saw one another first as beloved? What if that’s where we began?

God doesn’t tear through time and space to confer judgment or rapture folks off to heaven or leave some folks behind. God breaks into the human story to name and claim and love us. “You are mine. You are beloved. That’s the beginning of our story. Don’t you forget it. Amen.

Rip into our world once again, O God, and give us the good sense to be absolutely overwhelmed with joy at your proclamation, 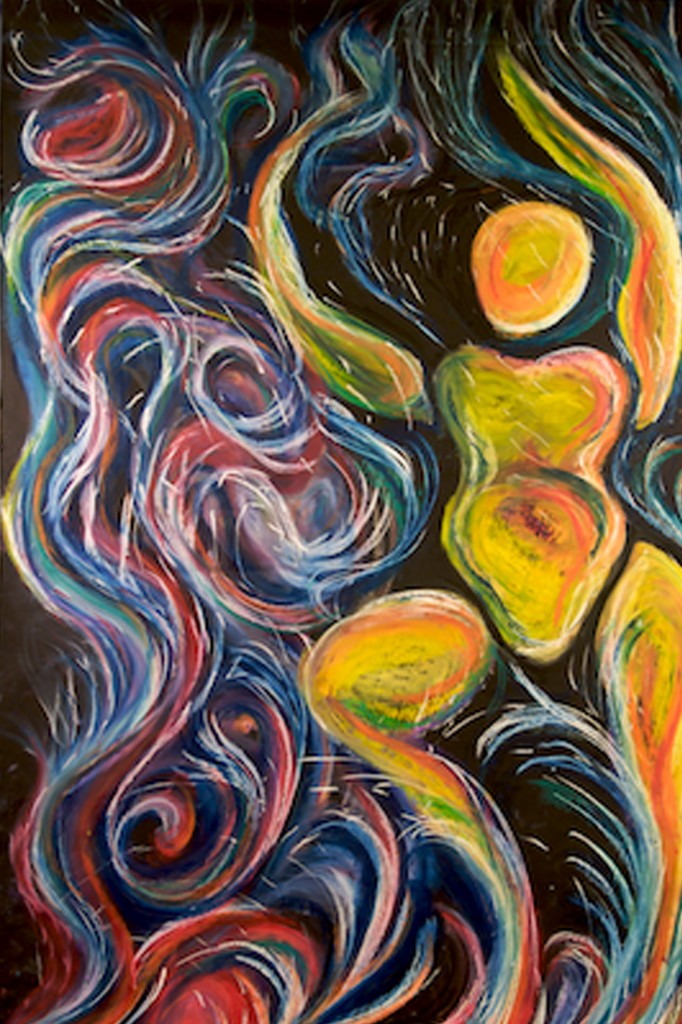 You know what I’m afraid of?

That in the midst of trying to name and attend to all the pain the Church has inflicted on folks over the centuries in the name of God, I’m afraid that sometimes I preach and paint an image of God that is so gentle, so simple, so easy on the eyes, and the ears, and the heart, that it is stripped of it’s power to comfort, let alone transform our starving souls.

On the day of Jesus’ baptism, nothing is simple. Nothing is easy. God rips into the world of human experience. God tears the sky and comes crashing through space and time to make an extraordinary claim.

Rather than a disembodied experience this baptismal moment is one of super-embodiment – it’s a sensory overloading, heart-stopping, genesis of life moment.

I wonder if Jesus’ whole life flashes through his mind’s eye as he is dunked beneath the surface of the Jordan. Not just his embodied life but his life that began at the beginning – when all of creation first burst forth. Beginning with that first infinite breath of God and on and on through his own life, death and resurrection. And ours.

I wonder, if just for a moment our physical reality, the one in which we rely because we can see it with our eyes, didn’t collapse in and expand back out as he came up out of the Jordan gasping for breath.

Here’s where we tell the truth about ourselves:

You call us to dive into your holy water with abandon O God,

To be caught up in the current of your love

And to be buoyed by your grace.

But your holy water scares us O God,

We worry it will overwhelm us,

We lose our footing and fall beneath the surface,

Pulled under by our fear and self-loathing.

We are lost. Any peace we might know is drowned out by

Trouble the holy water in which we swim, O God.

Do not let its placidness lull us into complacency,

send your wild and holy spirit to agitate the quiet waters of our apathy.

Enliven the tide of justice,

stir our passion and nourish our resilience,

so that when we rise from your holy water

and step back onto the banks of our lives

we know our names our